Prerequisite Knowledge:
​The last three instruments in the 6-pack (the attitude indicator, turn coordinator, and directional gyro) all rely on gyroscopes to work,

Gyroscopes
A gyroscope is a device comprised of one or more wheels/disks, which spin at extremely high speed. Gyroscopes rely on a principle known as rigidity in space, which states that a spinning object will resist any changes in orientation due to the conservation of angular momentum. Basically, a gyro will always maintain the same orientation, which makes it useful in instruments that measure the aircraft's position or orientation, as the gyroscope can be used as a reference. 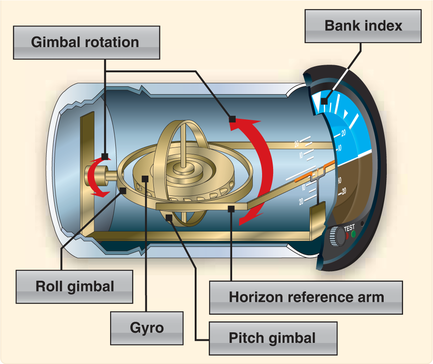 The turn coordinator uses a miniature aircraft to indicate straight and level flight, as well as a standard rate turn. A standard rate turn is a turn where the pilot will complete a 360 degree circle in exactly 2 minutes. This equates to a turn rate of about 3 degrees every second.

The turn and slip indicator uses a vertical needle to show this information instead, but it shows the same information: level flight, and a standard rate turn left or right.

Both instruments feature an inclinomter, also known as a ball. The ball shows the aircraft's coordination, when it is centered between the two lines ("in the cage"), the aircraft is coordinate. If the ball is out of the cage, rudder needs to be applied to coordinate the aircraft. The phrase "step on the ball" should be remembered when using the ball as a reference. If the ball is to the left of the cage, apply left rudder (push on the left pedal). If it is to the right of the cage, apply right rudder (push on the right pedal). Unlike some of the other gyroscopic insturments, the turn coordinator/turn and slip indicator relies on electrical power to spin the gyroscopes.

The Directional Gyro
All light aircraft feature some sort of "whiskey compass", which is a compass that is fixed to the aircraft front window or glareshield. This is an actual compass, which means it points towards magnetic north, and therefore can be used as a heading reference. However, these whiskey compasses can be difficult to use. In turbulence, they tend to move around a lot, which means it is near impossible to get an accurate reading. The compass also reads erroneously under acceleration, deceleration, or turns, which also makes it harder to use (these turn and acceleration errors will be discussed in more detail in a later article). Turning/acceleration errors affect all compasses. Below is an example of a whiskey compass 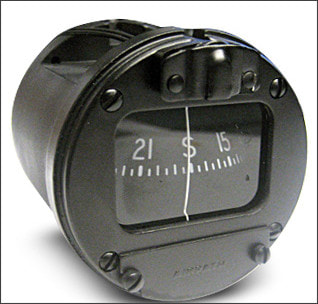 The directional gyro (also known as the DG) is not a compass, but a gyroscope. A compass will naturally allign itself with magnetic north, whereas a gyroscope only maintains a certain orientation. The DG is much more stable than a whiskey compass, and is not affected by turning errors, making it the pilots main reference for heading information.  However, since it doesn't naturally align itself with magnetic north, it has to be recalibrated by the pilot roughly every 15 minutes. A knob on the corner of the DG lets the pilot adjust it's reading to match the actual compass. When the DG is being recalibrated to match the compass, the plane should be in level flight flying at a constant speed, in order to provide the most accurate compass reading. 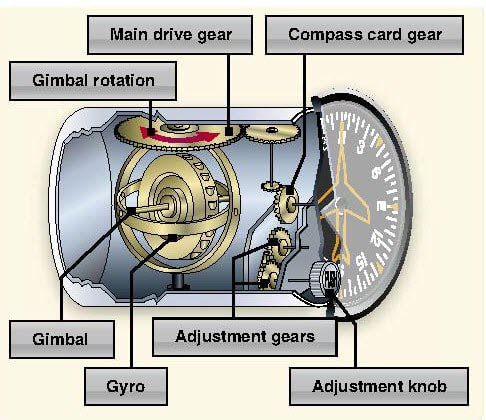 Generally, the DG relies on the vacuum system to spin the gyro, instead of the electrical system.

Aircraft generally have a suction gauge to measure the performance of the vacuum system. Since the vacuum pump is driven by the engine, low power settings result in low suction, which can lead to unreliability in the vacuum driven instruments. If the vacuum system completely fails (e.g. with an engine failure), the vacuum driven instruments will generally freeze in their current position as the gyros slow down, and eventually stop spinning. The same applies to electrically driven gyros when the electrical system fails.

That's it for gyroscopic instruments! The next article is to be decided​.
Powered by